Pictures are here of the second half of the trip. I feel like that family in that Chase bank commercial, it's very good to be home in my own bed. We had a great time but both of us are getting too old for these endless road trips. It's time to buy stock in Southwest.

Other news, we're getting ready to move into our new house and soon thereafter become the parents of a new dog.

Below is a picture of me, my wife and son at the Winchester House (damn he's getting big) 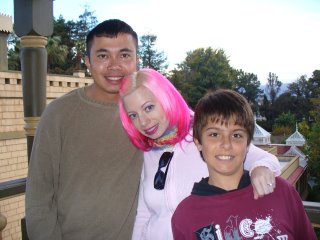 Posted by Sean Dustman at Wednesday, November 29, 2006 No comments:

There’s a new website poking fun at the Navy from the inside called GearAdrift. I guess you could say this is our version of the Air Forces Chairforce only most of the stuff isn’t written by a cranky Airman called Joe the Fat.

Check them out, I think the site has some good potential.

Plus check out their plans on refurbishing our carrier fleet! 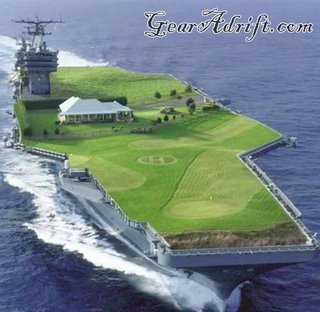 Posted by Sean Dustman at Wednesday, November 29, 2006 No comments:

I’m just about to finish off my Prescott leg of my trip. A bunch of really old friends from high school had a get together at one of the bars here Coyote Joe’s. Being the smarter older versions of ourselves, not as prone to making the same mistakes of our youth, we decided to time our get together at the beginning of happy hour.

Back in the day, I was known for being somewhat of a party animal but it’s been a while since that version of me has reared its head. Yes we have had parties at my house but in reality, its been very rare to see me drink more then 3 drinks in one sitting. I’m getting old and slow and my body doesn’t recover like it used to.

Friday night was another story. Two of my oldest friends Larry and Justin and a small collection of people who we haven’t seen in years took over the bar. Had a great night and caught up with ages of lost time and the next morning, there were a bunch of pictures on the digital camera and a deadly serious hangover that made me feel at like one of those zombies from Dawn of the Dead.

Whew, what a night, thanks for coming, those who did.

Update: Pictures that cover the entire trip are here!!!
Posted by Sean Dustman at Sunday, November 19, 2006 No comments:

In case anyone was looking for me

I'm vacationing in Prescott Arizona with my wife so don't expect me to post much from out here. Oh, hi visitors from Blackfive, Murdoc Online and Defense Tech, thanks for the ping guys! No, don't flinch when I meet you in person, I won't throw a camel spider on you.
Posted by Sean Dustman at Friday, November 17, 2006 No comments:

A milblogging buddy, Combat Doc and author of the blog A Candle in the Dark, had an essay he wrote and read aired by NPR’s “This I Believe”. Now you might not think that this is a big deal but Bill Gates, David Copperfield, Tony Hawk and Albert Einstein (yes it's been around for a while) have all read pieces placed on this program.

The pieces are sharp biting and whatever their view are, honest. Ernesto’s piece is called Untold Stories of Kindness. His writing goes to show you that there is such things as an atheist in a fox hole and contrary to stereotypes, enlisted men can be intelligent and observant and maybe the path to peace isn’t a battle to be won by the government but by a change in vision of the people.

Great essay Ernesto and I'm proud to be in the same line of work as you.
Posted by Sean Dustman at Monday, November 13, 2006 No comments:

Or what Doc did in Iraq when he was bored.

My original post about this was called "When stress comes calling" I just couldn't edit the video in country because it was filmed in a Quicktime format. Enjoy!!


A little back story behind me and bugs, back in 6th grade I got the tar beat out of me by two girls named Dian and Lynn for throwing beetles on them. Needless to say, I didn't learn my lesson, that camel spider at the end eating the lizard was Tito who is gracing my bar encased in fiberglass. Poor poor Tito, you can read his story here. No camel spiders were hurt in the making of the video (the one I threw had been squished and left for dead by one of my pilots outside my door)
Posted by Sean Dustman at Saturday, November 11, 2006 No comments:

I'm actually part of that 6 percent

This is a poll that Glenn Reynolds ran on Instapundit on the 6th of November,

It gives you sort of a demographic about his readers, I don't think he agreed with them though, I was just reading the signs. Lots of small issues over the last few weeks, months and years adding up.
Posted by Sean Dustman at Wednesday, November 08, 2006 No comments:

I made a trip to the ER last week and it wasn’t for work. My wife was having coughing fits and after pouring my considerable medicine cabinet full of anti-coughing drugs into her without any improvement, I know we had to do something more. After each coughing fit, she had a harder and harder time catching her breath and the coughing started to get a seal barking like quality so I did what any good medical guy does when he’s over his head and brought her to the ER. On the drive there her voice went out and every breath was a gasp and by the time we went through the door, the veins in her neck were sticking out and she really did sound like she was about to croak.

One way to always ensure quick service in a crowded full of people is to have a loud barking cough, have your eyes roll up in your head while doing it and turn blue at the same time and not being able to communicate a word. She beat all of my personal records for getting quick service to my Marines. A very nice staff (thank you Naval Medical Center San Diego) brought her to a bed and had an IV into her arm in minutes. After pressing some IV steroids and antibiotics into her vein and an inhalation treatment she was able to whisper, whew. During all of this, they did a CT and X-ray of her throat and chest and drew a bunch of other labs. Finally the friendly resident came by and let us know she had whooping Cough.

Guess so, there’s been an 11 fold increase in whooping cause cases in adults in recent years and if you google any news search engine you’ll find plenty of stories and sites dedicated to the subject. Figures it would have to hit us. Well she’s now hopped up on some high priced government sponsored drugs and we're buying stock in cough syrup.
Posted by Sean Dustman at Monday, November 06, 2006 No comments:

Watching the wave of political attack ads showing up, it makes me glad to have mailed in my ballot weeks ago so I didn’t let any of these angry people sway my vote one way or another. Being a middle of the road guy and seeing everything around me become polarized it’s hard to find a middle ground without stepping on the toes of everybody I know. Following the flock of the left or right doesn’t seem to be the answer anymore and I think sometime soon there’s going to be a political shake up of voters becoming tired of for or against politics. The problem with our political system is there is more then 2 paths to a solution and if you don’t agree with one of the choices that the politicians offer then the only choice you have as an individual is to not vote or choose the lesser of two evils. It also scares me that religion is taking a larger part in our politics when we are a nation established on religious freedom. It’s no wonder that many people are feeling a disenchantment with voting. Where the final four or fantasy football is more important then who’s thumb is on the red button. How can we decide on who’s going to lead us in the middle of a war when all of the politicians are arguing about issues such as stem cell research and abortion rights, what in the hell do those issues have to do with how we deal with the world at large?

The only people who are heard are the extremists screaming with the loudest voice or the politicians who have been taken down because of some scandal. You want to take over the news? Be a cute blonde young innocent Caucasian girl and disappear for a while or be killed in a mysterious way. This doesn’t say much about us as a nation.

As usual in life there is not a good answer.
Posted by Sean Dustman at Saturday, November 04, 2006 No comments: