One of the wonders of social networking is the ability to gather people who share a common element. Before my trip to Prescott, I had told two classmates that I would meet up with them on my next trip out and left a comment about that on Facebook. Other people from my graduating class started pinging in and so we decided it was as good excuse as any to set up a meet on the day following Thanksgiving. 8 of us gathered at a local watering hole called The Outpost Saloon. My 3 beer limit went out the window and I had to call an old friend to give me a ride home, thanks Theresa, I owe you big!

In a couple of years, our 20th is going to be coming into view. I wish we had Facebook and Myspace for the 10th, with a couple of messages back and forth, it was easy to set up this little gathering. Looking forward to testing the power social networking with the 20th. Here’s a picture of the gathering, we all had a great time. 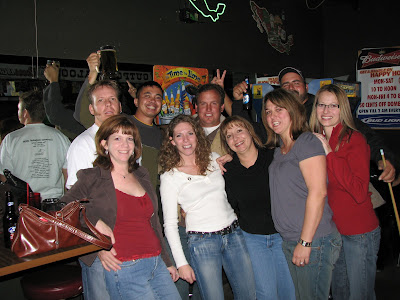