My connection to the world died one day

A couple of months ago, we had some friends over to play board games, no alcohol was involved. Heather was kicking all of our butts at Pop Culture Trivial Pursuit when one of the guys playing got up to get something to drink out of the kitchen and tripped over my laptop cord.

The computer moved a little and the cord popped out, something I’ve done literally hundreds of times. I paid it no mind.

So a couple of days later I brought the it to a computer repair shop, nope, not worth fixing, we can stick the hard drive in a new computer. Guess the power supply had snapped off of the mother board and no one wanted to take it on. So I brought it home, unscrewed about 40 screws opened it up to see how bad it was.

It was very bad, there was no way I was going to be able to get that plug to work like that again. For a minute there I thought I was going to cry then went hmmm.

I can probably do something with that.

So I butchered the power cord, opening up the strands and following the lines where the original went and in a moment of pure genius, let the mad scientist take over while my conscious mind went into a trance, soldering and in turns giggling like Egor then weeping like a heart broken teenager. When I woke, everything was back together and there were no loose screws around.

It was time to put the plug in and…

It booted up and everything turned on just fine. I went to log in and realized half of the keys didn’t work, dang, I hadn’t plugged the keyboard in properly. After all of that, I was too lazy to take it apart again, my creative juices had dried up so I did the next best thing and turned it into a desk top with a USB keyboard, wireless mouse, speakers and the external hard drive I did a similar hack job to a couple of summers ago. 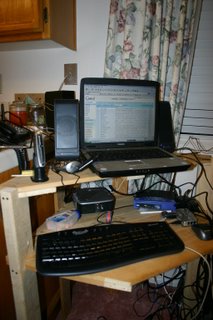 Good thing that came of all of this? We now have a home computer that won't move and my beautiful wife has bought me a new laptop! Thanks hun, you are the bestest wife ever!