With something other than my bride, the new Canon EOS-1D Mark IV just came out. Over the past year or so, DSLR cameras have included the ability to shot video and I saw this video shot by the Mark IV back story can be found here. Wow, for someone who's taken some low light videos, color me impressed, the video was taken just using street lights, it sees better in the dark then the human eye. The entire video was taken at 6400 ISO.

Unfortunately I can’t afford to drop 5 G’s on a camera, no matter how cool and sleek it is but with this camera, oh man. ISO settings up to 102,400? I can’t even get a grip around that number. One of these days, I’m going to take up my photography reins again but for right now, I guess I’ll just have to make due with my old S3. But if Bill Gates is a fan of the blog, it’s in my wish list!
Posted by Unknown at Tuesday, October 20, 2009 No comments:

This is a pretty good deal for active duty military, I did it last year and got a Sear's gift card in the mail.
Sears invites all active military members to register for the Sears Heroes at Home Wish Registry program. The Heroes at Home Wish Registry allows America to thank our military heroes and their families by donating to the program. All donations will be evenly distributed in the form of Sears gift cards amongst all military families and members accepted into the program. Registration will be closing soon so register and review program details at www.sears.com/wish today.
Posted by Unknown at Thursday, October 15, 2009 No comments:

Email ThisBlogThis!Share to TwitterShare to FacebookShare to Pinterest
Labels: deals

One thing about medical, when business is slow, it means everyone is doing alright. I’m currently in El Centro this week and having a hard time finding gainful employment which is good but hate feeling like a slacker. El Centro is much like the base I was in Iraq would feel like if it had potable water and cable TV or how it would look like in a decade from now. Otherwise the countryside looks the same, there’s the same feeling of dryness in the air and deserts that stretch out into the horizon. My new unit, VFA-125, trains Marine and Navy pilots on how to fly the F/A-18 C’s and D’s, there’s also another squadron on my base that trains pilots to fly the E’s and F’s. El Centro is one of the check marks in the students syllabus and medical tags along these little detachment to make sure everyone is doing alright, taking care of sick call, first aid or part of the human factors investigation team if there is any sort of mishap.
This is actually my first time out here El Centro, I‘ve seen the sign numerous times driving Yuma, a place I‘m familiar with being with the Marines. I would have to say the housing here is worlds better then Yuma. WiFi in the rooms, cable TV, DVD player, all of the comforts of home. My ride out here wasn’t so nice though, I put in NAS El Centro into my GPS and ended out in a place in called Campesinos Unidos Region Ix Carmen Pe Nas in Brawley, 20 miles out of my way, lost in the middle of the desert on the far side of midnight. So I went to a connivance store and asked how to get to the Navy base and drove for another half hour and pulled into Naval Air Field, not Naval Air Station El Centro. At least I didn’t end up in Mexico.
I’m heading out to a Bar-b-q this afternoon and tomorrow, back to Lemoore.
Posted by Unknown at Thursday, October 15, 2009 No comments:

Just sharing some pictures from the latest ball that the bride and I went to last week. The last few weeks have been a blur of flu shots and filing forms, not much of interest happening on this side of the world. Busy mostly with living life instead of writing about it and life hasn't been too bad. I need to find my writing bug again and I'm sure it will come again, it's just not hitting me right now. 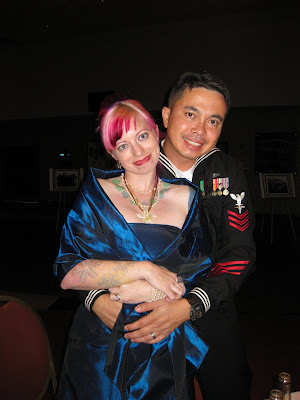 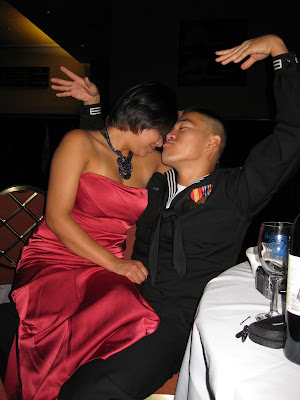 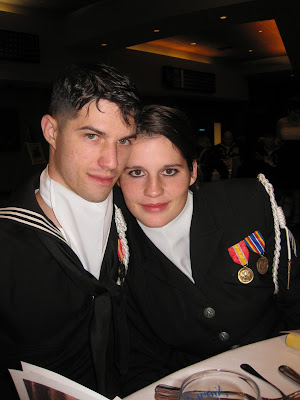 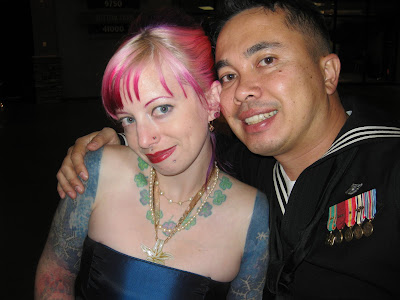 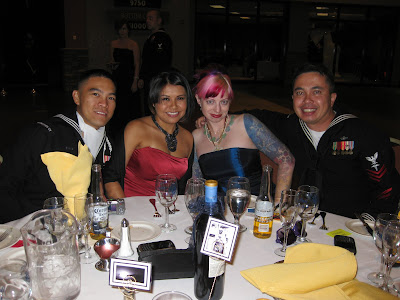