Finally a month after our trip to Glacier National Park, here’s the story of the adventure.

Day One
A couple of months ago, soon after the Tardis camper remodel, the bride started talking about wanting to make a trip to Glacier National Park.  So I got Neal the truck ready, being named so after the Astronaut for going to the moon, my truck is on the return trip at 274 thousand miles.  So after a few smaller shakedown camping trips, we took off on a Sunday morning drove 30 miles stopped to get some ice and came back to the truck and the engine had seized up.
You see, a while back ago on another adventure, one of my hoses had popped off and the truck overheated blowing the head gasket and I had not got around to fixing it.  Well, the final straw was tossed on Neal’s back and he wasn’t going to take it anymore.  So I called a tow truck and right when the tow truck arrived, I turned the key and he started up.  I paid the tow guy for his trip and drove home.   Guess the engine is at such a stage that it seizes when it’s hot.  Sigh.
We decided, well, I am on leave for a week, let’s just pack up the car with the tent and supplies and head out.  So, 2 hours later, after a very quick packing job because we had to cut down on what we were bringing.  We hit the road much later than expected and decided that Louise Erdrich’s, The Plague of Doves would be a good road tripping book.  It set the tone well for the first part of the trip. 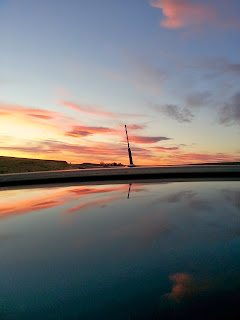 Sunset behind us over my moonroof
11 that night, we were tired, I was grumpy because one of my cars was mortally wounded and we decided to stay at a Super 8 in Spokane.  One thing about owning dogs that you can’t expect to stay in a really nice place but Super 8’s are always accommodating to pets and give a military discount.  Sometime in the life of this particular Super 8, it looked like it had hosted regularly graduation parties and biker parties.  I’m okay with that.
Day 2

Next morning, bring shiny after a good night’s rest, we hit the road again and broke our fast at Dawn of the Donut, a zombie themed donut in Spokane. 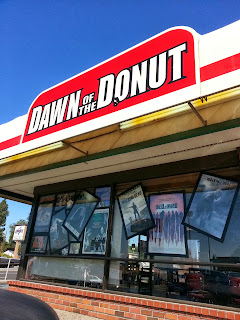 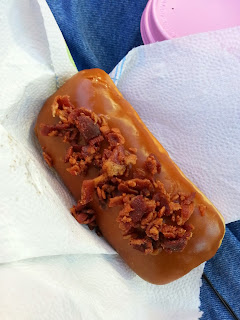 By the next afternoon after driving through some beautiful country in Idaho and Montana with a stop for Bear repellent we arrived at Glacier National Park only to find that there were only 2 campgrounds open after Labor Day due to the government sequester.  Apgar was full and the other, Many Glaciers was only taking hard shell campers and mine was still sitting at home hanging his hood in shame.

When we planned the trip, we planned it for camper.   We kept driving because on our map, there were some campsites in this particular direction and the wife indicated a dirt road which we abandoned early on, deciding that it was too rough after a mile for the Fusion.  Instead, we turned around and drove down a different road, on which there was supposed to be another campground.  However we missed an important right turn at Polebridge village in the dark and ended up randomly wandering down some dirt road for over an hour, every once in a while passing a closed campground.  Until we saw the a campground symbol with an arrow pointing down a small one lane dirt road with a 10 underneath it.   So we drove those 10 miles slowly in the dark.

Consider at this point, we had spent 3 hours of just driving in one direction on a dirt road and had not seen another car.  I had scary movie themes running in my head, considering how many Wrong Turns it took to get here and that we were totally cut off from cell service, it was to be expected.  Finally after a very long and slow 10 miles we were at this mystery campground, which wasn’t a mystery anymore.  It was called Tuchuck and it was just miles away from the Canadian border and we were pleasantly surprised to find that it was free, had 7 very large, clean camp sites and we were totally alone.  Added bonus, there was a stream singing merrily right behind the campsite we chose.  I could have kissed the ground but didn’t. 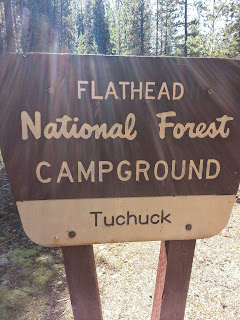 Many people are horrified about having to set up tents in the dark.  To me, those people don’t practice enough, we were veteran campers and had the Montana 8 tent up in less than 10 minutes and started the queen sized air mattress inflating.  Okay, even though we were totally caught by surprise having to switch out of a camper with no notice.  We were used to tent camping more than anything else and it wasn’t that big of a shift to us.

I made steaks that night with corn and home fires, and we enjoyed the fire and the music of the wind through the trees and water in the back ground.  This is life.
Posted by Sean Dustman at Thursday, October 17, 2013 4 comments: