Our trip up Highway One and 101 from California to Whidbey Island Part 1, day one and two


First note about this trip, the bride planned everything out weeks in advance and put it all in a binder which I’m looking at for the first time.  She spent a week looking up directions, taking notes on what’s interesting everyplace along the drive and making reservations on the best spots to camp.  We planned on staying in a motel 2 nights but that ended up being 4 nights after a largish rainstorm and we were muddy and needed a bit off warmth.  Say what you want about Motel 6, but they gave us a military rate of 45 bucks a night and no arguments about two 50 pound dogs.  All of the campgrounds mentioned take dogs just make sure to clean up after them and keep them around you like a second skin.  So on with the journey.

We left out of San Jose on the morning of June 10th, crossed the Golden Gate Bridge and drove up the 101 till it connected to the 128, which is also called the Tunnel of Tree’s when you get closer to the coast and we got to see our first redwoods of our journey north because like the name says, it was a tunnel of trees.  Very pretty and scenic, too bad I was driving or I would have taken more pictures.
Our first night was at Mackerricher State Park which is located 5 or so miles north of Fort Bragg CA.  Basic campsite, running water and flush toilets but no showers.  A hundred yard walk to the beach and seals on the beach.  My first run in with wild life was here too, I was sitting roasting a marshmallow and a spotted skunk bumped into my leg as it stumbled by.  Glad the dogs were in the tent or it would could have been ugly, or is that smelly? 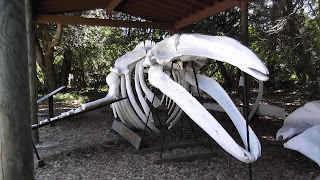 this is a whale skeleton at the entrance to Mackerricher

To reserve a campsite online is 8 dollars and the fee for Mackerricher was 35 bucks which seems in line for most of the California campgrounds.  One thing I noticed was that Oregon campgrounds were cheaper and they all had showers which were free.  Camping in the Sierra Nevada’s last summer, none of those campgrounds had showers either.


Note 2: We’re driving in my 97 Toyota Tacoma with 270 thousand miles on him with a camper shell, his name is Neil, like the astronaut because he’s driven to the moon.  Our biggest problem is that we over packed and unloading and loading took up an hour or so each side of the day and my old knees feel it and there wasn’t much spare space, specially when you are married to a souvenirholic.  Our tent was a Colman Montana 8 which is easier putting up with 2 people but we could do it in 10 minutes by the end of the trip, we had a queen sized blow up mattress which we put a blanket on top of to keep sharp doggie feet from poking holes in it and 2 dog beds.  Note, always bring a patch kit with you when you have a blow up bed.

The next morning, I made breakfast of eggs, home fries and toast, we were off towards the Albee Creek Campground at Humboldt Redwoods State Park.   We drove north on Highway 1 till it connected again with the 101, but before we got on the 101 we went to see the Chandler Tree, a big redwood that someone had carved a hole that you could drive through and here’s Neil driving through it. 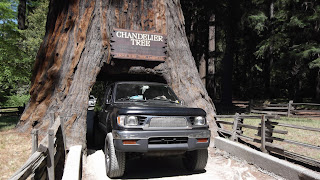 We then followed the 101 till the first exit of Avenue of the Giants and we followed that 20.8 miles, here is where the directions got tricky, you can’t really see the sign to turn so it’s important to turn left at exactly 20.8 miles, sure it would be quicker to take the 101 but you would miss one of the most beautiful drives I’ve ever been on.  Drive past the turn to Weott on Avenue of the Giants, drive over a bridge over a river which goes under the 101 and take a sharp left, the campground is 5 miles down that road. 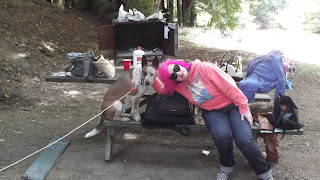 Albee Campground has coin operated showers, you can’t take dogs on the trails so we stayed in the area. I made dinner, we took showers and crashed. The next morning on the way out, we checked out the Rockefeller Grove and Bull Creek, some of the biggest trees you'll probably ever run into. It's late and I'm done with typing for tonight, expect more posts on this over the next few weeks. 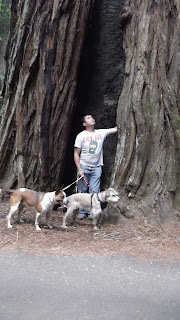