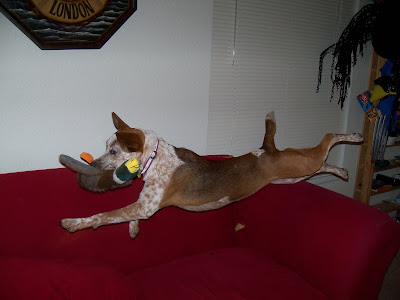 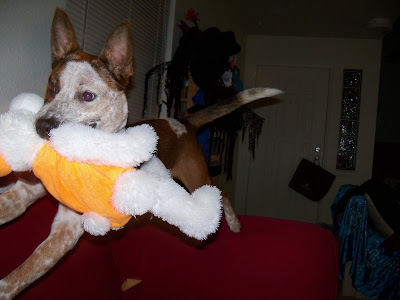 Our new dog Margot's favorite thing to do, fetch toys that I throw across the room and make a massive leap onto the pillows on my battered couch, to think, just last month I was thinking about getting a new one. I think I'll hold that off for a while.
Posted by Unknown at Tuesday, October 26, 2010 No comments:

My wife is going to grad school up in San Jose and she got this idea in her head that I'm too lonely down here in Lemoore by myself during the week and needed some company. So after a couple of weeks of searching around online, we went out with Gatsby (our 5 year old faithful mutt) to check out some of the selection she had found. I figured I would let Gatsby make the final choice since he's really the four footed boss around the house. We met the first two dogs on the brides list, Venus, who was a was a shy little black and white dog who had a great liking for eating cat poop (3 pieces while we met) and Margot, an Australian Cattle Dog, who was a bundle of energy just a little bit smaller the Gatsby. Gatsby and Margot got along like 2 peas in a pod so the choice was made. 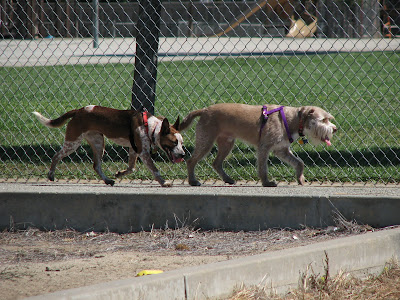 Since then, they continue to get along good, it took less then a week to get her potty training back (which was better then Gatsby) but she has a real problem that I'm really trying to shake. If it's an object small enough to lift comfortably, she'll chew it up. This list includes, books (all of Sherri Tepper), wires, power supplies (one of my externals), shoes (2 sets of Vans, my killer bunny slippers and an old pair of my wifes boots), CD's, white out, medical tape and the total destruction of stuffed animals. Bitter Apple doesn't seem to work so instead of despairing, she's given me an excuse to make some lifestyle changes. My house is becoming doggy and baby proof and neater at the same time, good changes but I do miss the use of that external.
Here's the latest family picture. 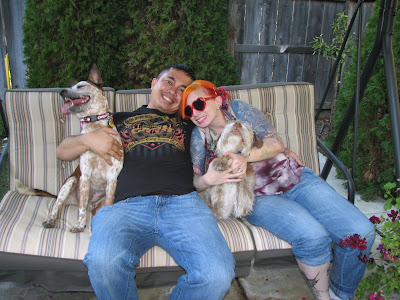