One of my Martial Arts Videos

Out of 20 or so videos that I strung together to make the entire video, it will give you a taste of what I put together. These guys were going though the Tan, Gray or Green belt course and it was no joke. Sgt Luna was our instructor and I've never seen his like, great job brother. Video and pictures taken with the Canon S3 I purchased at the beginning of the deployment.

and there is no place I'd rather be in the world right now and I think the picture speaks for itself. Thanks for the support. 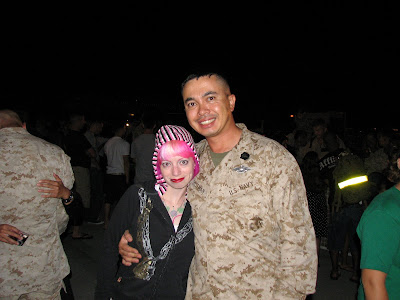 Email ThisBlogThis!Share to TwitterShare to FacebookShare to Pinterest
Labels: dustman

Once again I’m hanging out in this hot and sandy place, we flew in early one morning and I said to Swear, “it’s not too bad today” and he replied with “it’s only 8:30 in the morning” and I said “Oh”. One of my Marines had injured their back during the unloading process so I made a trip over to medical where they kindly provided some medical care and on my dime, I took her over to Taco Bell for the first time in 6 months. Who knew Taco Bell would taste so good?

Got back to the barracks and crashed out due to the lack of sleep I’ve had over the last couple of weeks only to wake in a blast furnace. The power had gone off and it felt like it was 140 degrees inside and I crawled out into the 117 degree day and it was cooler out there. To think, there are people live like that all of the time. I had it good.
I’m watched black market DVD of Hancock and the dog on the movie looked like my dog Gatsby. The movie didn’t get great reviews but I liked it, far from perfect people with some incredible powers. I’m into a complex storyline that makes you fill in the blanks and has a potential for a lot more.

I think there’s a conspiracy against the Marines who come though Kuwait, for some reason on every one of my trips out here, they stick us as far from the chow hall as you can be and still be on base or at least putting the chow hall at the opposite side of the base from us. I think I would have lost a lot more weight if I was stationed here. It’s sort of like purgatory, considering all of the people in the bible were from places like this, they must have known what they were talking about.

Today I woke up around 10 (yay!) and went to chow at noon, then was going over to the internet café and there was a line and next door I saw a sign for wireless internet and it was 4 bucks a day and I was on that like white on rice and started walking back to the barracks but it was so hot that I had to make a pit stop at the Rec center and watched The Fifth Element and downed 4 bottles of water.

Then back to the barracks where I wrote this. Sounds like I’ll be back home before too long.
Posted by Unknown at Sunday, July 20, 2008 No comments:

Email ThisBlogThis!Share to TwitterShare to FacebookShare to Pinterest
Labels: dustman

As my time draws to a close out here, I had one more project to complete. The book form cruise book fell though because we couldn’t get enough people to buy them to make it economically feasible. So, the cruise book staff voted to make another DVD and me, being the DVD guru with a brand spanking new laptop to handle it was put in charge. We had less then a month.

First I needed to gather a game plan, we started brainstorming. All of the brainstorming somehow ended up coming out of my head for some reason, I had them gather up all of their personal pictures and video onto a cruise folder on the share drive, decide on a musical theme for their shop and teach them how to make movies so I could be more of a directing force behind them and focus on the extracurricular activities that I had filmed and taken pictures of, i.e., softball league, martial arts, field meets, etc. I would also go around the different shops and letting everyone from each shop give a greeting and intro.

So I went to work on my works of art. I started off with 30 hours of video and a couple thousand martial arts pictures and cut it down to less then 20 minutes. I knew what I had just had trouble finding the shots, I was overloaded with information, songs I had liked before became earworms with slideshows and video haunting my dreams.

After what seemed like an eternity, the Kung Foolery video was done (to be uploaded to YouTube when I get to the rear) and I turned away to check on the progress of my co-conspirators and found that only one shop had made any progress at all. The Military Intel guys had everything put together for their shop including the interview and it was nicely packaged (not quite as nice as mine) and ready to be added to the final product. One Cpl wanted to do the Kung Fu and her shop, I had to talk her out of it at the beginning because she didn’t know what she was getting into. I think I was a little harsh because she didn’t have anything ready but was willing to work on it.

Just about everybody else said, “we have no clue, please help us doc”. The hardest part of making a video for me is picking the music theme. After that, everything else flows into place, it takes a while but at least you have a rhythm to put a timeline. That gives you objectives on what kind of pictures or videos you want to match to the words or the tempo.

One shop kept turning in inappropriate songs for the family viewing audience and couldn’t agree on anything so I slapped their pictures together with YMCA by the Village People and stuck that on the share drive. They then came up with some music that worked and I redid it even though, YMCA did seem to work pretty well considering how little work I had put into it.

Anyhow, I’m tired and rambling, today, I finished the final product which ended up being 116 minutes. In two weeks, I had produced and published, almost totally by my self, a feature length film (other then the 20 minutes that 3 of the shops did). My last video which up to that point was the longest was 33 minutes.

Ack, it was a true bear but I’m glad it’s done, I’ll just have to see how what the responses are like since I was under a deadline, I didn’t have time for anyone (including myself) to edit any of my work (just like this post).