Saturday the 26th, we laid my brides grandfather, Marine MSgt Ken Maddux to rest with full honors at the Oak Hill Cemetery in San Jose, the family wanted me to take some pictures. 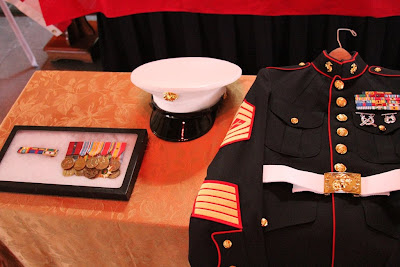 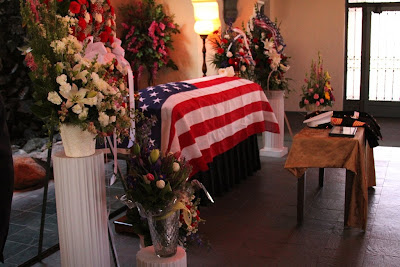 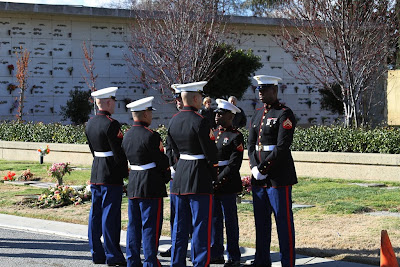 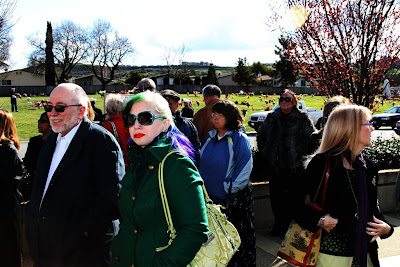 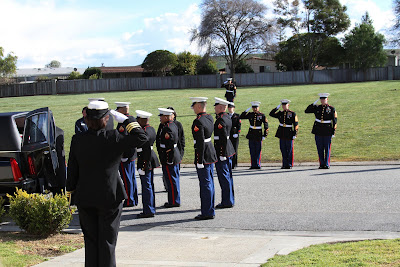 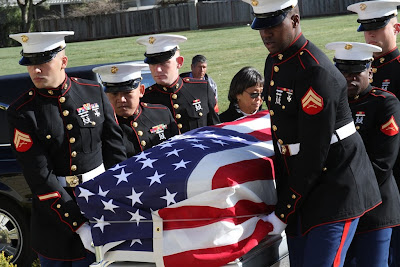 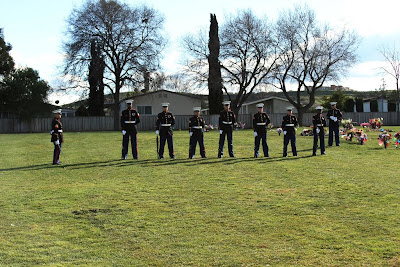 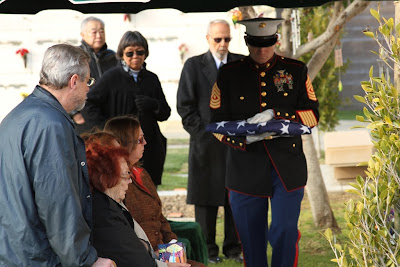 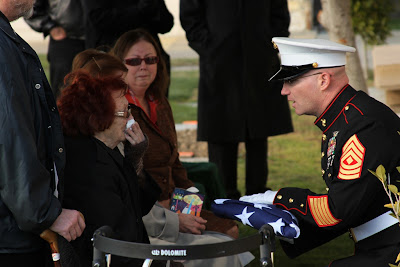 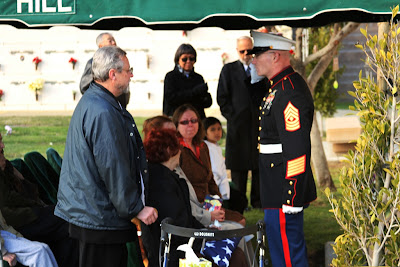 Posted by Sean Dustman at Monday, February 28, 2011 No comments:

I am the proud parent of a Canon 7d

As most of my readers know, I'm a picture taking fool and it's something I deeply enjoy doing. In a couple of years, I'm going to have to figure out what I want to do when I grow up. I enjoy seeing life through a lens and when I can, putting it down in written form. Last week I took a step towards the rest of my life by sinking a great wad of cash into this camera, a Canon 7d. 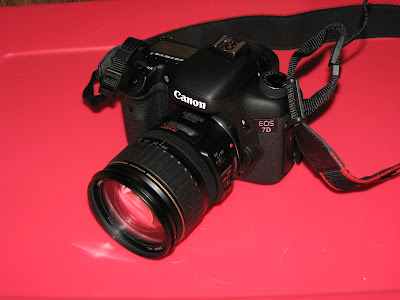 my new baby
While I'm an alright Corpsman, I have a bug inside of me that forces me to document everything, lay it all out on film or write stories about it. Four trips to Iraq, 40 thousand pictures and 200 gigs of personally taken video say something, that there is something wrong with me, I'm a picture hoarder. At least with the advent of digital media all it takes is a fairly cheap hard drive to hold all of my passion in (and lots of back ups). 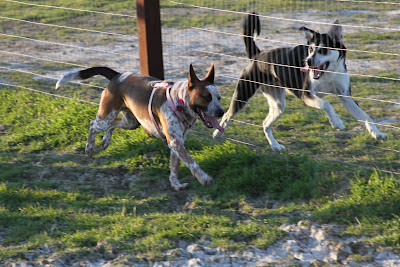 picture taken with the 7d at the doggie park
But eventually I want to make something of that photo bug that tosses and turns inside of me and buying this camera is a step in that direction. 3 years from now, I'll need to find a new job, something to keep food on the table, roof over my head, kibble for the mutts and my wonderfully beautiful wife in hair dye and cute shoes. Might as well do that by doing something that I love.
Posted by Sean Dustman at Tuesday, February 22, 2011 No comments:

Bravery from the Home Front: Top 50 Blogs for Army Wives (or Spouses)

Doc in the Box was just listed as Number 27 on the list of helpful blogs for military wives or spouses, some good info here.
Posted by Sean Dustman at Tuesday, February 22, 2011 No comments:

My first obituary with my wife as the editor.. 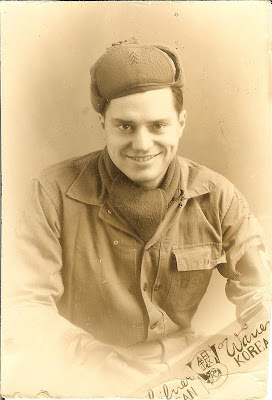 Kenneth joined the Marines on September 10th 1942, and following bootcamp, was assigned to 5851 Seacoast Artillery Battery on Eastern Island where he served in the fire Control section for 18 months. Upon returning to the states, he married his fiancée and high school sweetheart, Nita Pavan. In 1945, he was honorably discharged and moved back to San Jose where he worked at J.C. Penneys. In 1950, the Korean War started and he joined the Marine Reserves, 12th Amtrac Battalion. Just four days later, his unit was activated and he went to Camp Pendleton for training. Kenneth was later shipped off to Kobe, Japan then Inchon, Korea. 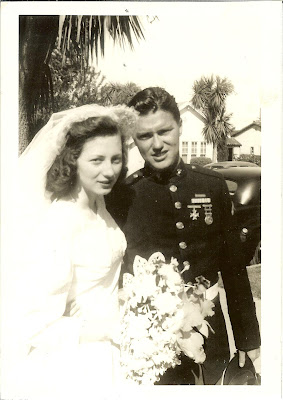 He returned to the states in 1951, was stationed in Alameda, CA and was promoted to Staff Sergeant. The following year, he attended Recruiter School and served in San Francisco as a recruiter and Public Information Officer until 1955, when he was promoted to Tech Sergeant. Following recruiting duty, he was stationed at Camp Pendleton where he was assigned to the Camp Pendleton Scout newspaper where he eventually became the Editor. Following the assignment at Camp Pendleton, he was stationed in Okinawa in 1958 where he worked for the Armed Forces Radio and Television Service until 1960. From 1960-1961 Kenneth was the Press Chief at Marine Corps Air Station El Toro, and from the years 1961-1964 he was Public Relations NCO for the 14th Marine Corps District in Hawaii. During the next two years, 1964-1966, he was the Information Chief at Marine Corps Air Station Cherry Point. Finally, from 1966-1967, Kenneth was the Information Chief at Camp Pendleton and from 1967 to 1968 he was the Manager, Military Assistance Command, Vietnam, Press center, Danang where he supervised a restaurant, two cocktail lounges and a 58 bed hotel. When he eventually returned stateside to his family in San Jose he had retired as a Master Sergeant.

His next career at the Keystone Coffee Company would last from 1968 to 1983. After 5 years of retirement he began his third career at Penney’s and retired once again.
Kenneth never met someone who didn’t like him and he was a natural storyteller.

During his time as a Marine, he raised a son, Jan and daughter Deborah. Kenneth is survived by his wife of 65 years, Nita Maddux, son Jan Maddux, daughter Deborah Diggins, grandson Max Maddux, granddaughters Heather Diggins Dustman and Liesa Maddux Manson and great grandchildren David and Maria Manson. He also leaves behind his brothers Dick and Bill Maddux. 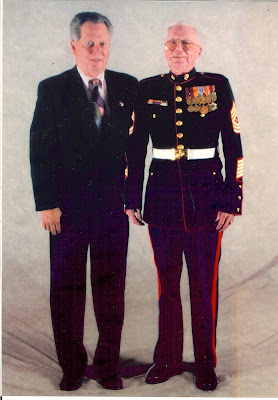 The funeral service will be held on Saturday, February 26th at 2pm in the Rose Chapel, also at Oak Hill.
Posted by Sean Dustman at Sunday, February 20, 2011 No comments:

We made a trek to Yosemite for Valentines day with the dogs and for those who haven't experienced it, I made a small video because I thought it was interesting.

Posted by Sean Dustman at Wednesday, February 16, 2011 No comments:

Marines will be Marines

I miss being a full time Corpsman of Marines, last night I discovered Terminal Lance, which gave me a reminder of where I came from. It's a web comic, one of my former Marines, Jay, posted this clip on my Facebook wall and introduced me, thanks brother!

After spending hours just reading the comic's I started down into the story's beneath them and saying to myself, I've been there. Maximilian Uriarte is a genius in catching the details of things that are giggled at for a second then forgotten later because you think no one else will think that's funny. Good job man!

Speaking of Marines, below was made by another genius Marine catcher of details, I laughed till I choked. Instant classic!

Posted by Sean Dustman at Wednesday, February 09, 2011 No comments: