I finished up our housing inspection on Friday and over the last two days, have just worked on catching my breath.  Every time we move, we seem to have a more gear then the last time we moved.  The bride just graduated out of San Jose State with her Masters in History and most people can not imagine how many books that is, well I can, it's about equal to the amount of books I had sitting around the house before  her stack was added.  Over the last month, we've felt like we're filming an episode of hoarders, not much fun.

Things that have happened over the last month, I finished my tattoo 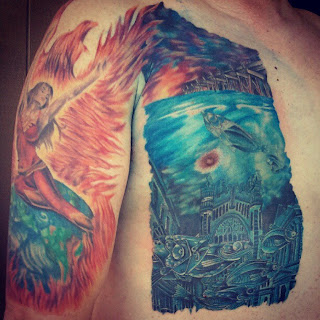 The quote I attached to this when I posted it on Facebook, "This is my lighthearted look at TEOTWAWKI, in flame or flood. The Phoenix because at heart, I'm a comic book geek, I'm from Arizona and I've always had dreams of bursting into flame. The water because my earliest memory was being pulled out of a pool by my hair, I've always loved the mystery of underwater cities, the bridge is memories of Key West, the fire like a sunrise that sets the sky alight and the ocean ruled by robot fish because I could. Thanks Meghan Ortiz, the both of us are going to miss how you could turn our visions into art."

We planned out our trip to Washington taking the long slow route up the 1 driving 50 to 200 miles a day in Neil (my battered Toyota Tacoma with 270 thousand miles on it, named Neil because he's been to the moon (220,000 miles away) and working on the trip back).  The wife has every place we're staying reserved and I plan on taking a lot of pictures.

Remember what this weekend is about, its for remembering those people who gave it all for a cause they believed in and that sacrifice should not be taken lightly.  This weekend, I'm remembering my friend Mark Lawrence, who died on January 10th and was an Army SSG stationed out of Fort Bragg.  The reason I'm remembering him is because I have not seen a single story out about his death in the news and as far as the world goes, he's been forgotten.  But not by me nor by his family.  He worked in the Wounded Warrior Battalion and his death was ruled a suicide, he was also worked with Army SSG Joshua Eisehouer, who was involved in a police shootout on January 14th, I'm not sure if these are connected but I haven't found anything online about it.

Making the Most of Your Memorial Day Weekend

guest post from Kevin Pearia
Memorial Day is one of our country's most solemn holidays, a day set aside for Americans to take time to think about the men and women who have given their lives for the preservation of law and liberty.  While for many Memorial Day does evoke memories of those who have given their lives for our country, it is important that Americans use their time off to truly appreciate the sacrifices of those who have served and continue to fight for freedom.  It may seem like a difficult task when money is tight, but fun and respectful Memorial Day weekend activities that don't break the bank are plentiful:

Host a Potluck
The ability for friends, family, and even strangers to come together and contribute to a shared cornucopia has been an American tradition for centuries and is a product of both our appreciation for personal freedom and our economic success.  Both of these would never be possible without sacrifice.

Make That Big Home Improvement Purchase
If you've been saving up for some appliance updates or other big home improvement purchases, Memorial Day Weekend may be the perfect opportunity to spend the money.  Sales are abundant, as anyone without DVR is well aware.  All the while you're taking advantage of the economic freedoms others fought and died for, and better yet, doing so for the sake of responsible and necessary updates.

Hit Up the Nearby Museums and Zoos
If you live near a heavily populated part of the country then pay a visit to the closest art museums, history exhibits and science centers.  The cultural freedoms these institutions represent are some of the most important aspects of American society protected and preserved by those who have died serving her.

Enjoy the Great Outdoors
The United States is home to countless acres of virtually untouched beauty and wonder.  Plan a weekend camping trip or bike the trail if you seek an inexpensive way to appreciate the natural gifts of this great country.

Attend a Parade
The classic Memorial Day parade remains a great way to honor the memory of fallen soldiers without withholding fun and excitement.  In addition a parade is an economical event so long as you find a free place to park your car.

In addition, don't forget to perform a simple web search for free and inexpensive events happening Memorial Day Weekend in your area.  When it comes to choosing what to do this Memorial Day, simply taking the time to remember those who paid the ultimate price is enough to know you're doing the right thing.